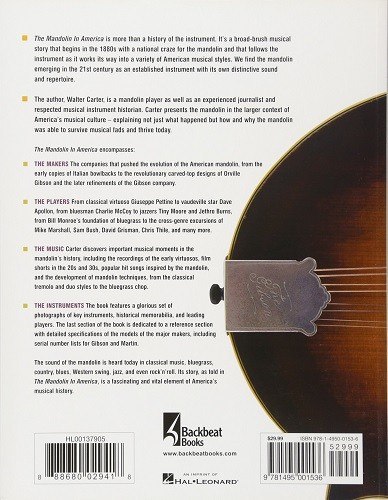 The sound of the Mandolin is well-known today due to its use in classical music, blues, Western swing, jazz and even rock 'n' roll.
This insightful book tells the fascinating story of The Mandolin In America, charting its history from the 1880s, when the instrument first became a national craze, to the 21st century, where it is still enjoyed as an established instrument with its own distinctive sound and repertoire.
Filled with colour photographs, posters and more, this book covers every aspect of this unique instrument's past, including:
The makers - the companies that pushed the evolution of the American Mandolin, from the early copies of Italian bowbacks to the revolutionary carved-top designs of Orville Gibson and the later refinements of the Gibson company.
The players - from classical virtuoso Giuseppe Pettine to vaudeville star Dave Apollon, from bluesman Charlie McCoy to jazzers Tiny Moore and Jethro Burns, from Bill Monroe's foundation of bluegrass to the cross-genre excursions of Mike Marshall, Sam Bush, Dave Grisman, Chris Thile and many more.
The music - the author, Walter Carter, discovers important musical moments in the Mandolin's history, including the recordings of the early virtuosos, film shorts in the 20s and 30s, popular hit songs inspired by the Mandolin and the development of Mandolin techniques, from the classical tremolo and duo styles to the bluegrass chop.
The instruments - the book features a glorious set of photographs of key instruments, historical memorabilia and leading players. The last section is a reference section with detailed specifications of the models of the major makers, including serial number lists for Gibson and Martin.
152 Seiten in englisch