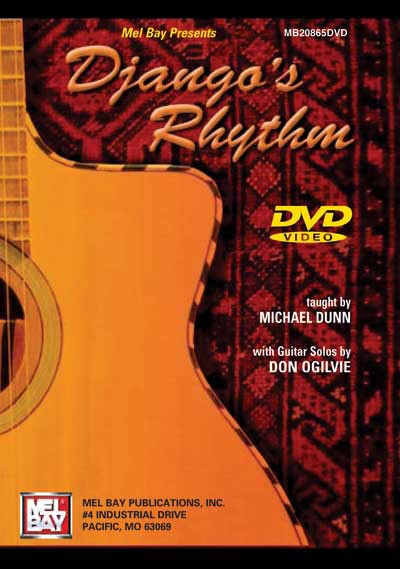 In the world of Gypsy Jazz, the original Quintette of the Hot Club of France achieved an energy output seldom equaled or surpassed for 7 decades or so. Django wanted to have two rhythm guitars behind him when he soloed to give him a full sound. Then when Grappelli soloed, Django would interject himself between Grappelli and the rhythm guitar section. From this vantage point, he would 'push' Grappelli with a series of well placed shots, shuffles, and turnarounds that would have the effect of driving the group to a greater energy output as the song approached its conclusion. In this DVD, the classic 4-to-the-bar rhythm is broken down into four separate usable styles. After that, Django's syncopated rhythm shots are analyzed and presented by example from a simple backbeat to 2-bar long syncopated strums. My own philosophy is that the rhythm guitar section is the most important component of the Gypsy Jazz group. The rhythm guitar should be in a position to drive and not follow the group. The information contained in this DVD will give you the rhythmic tools to infuse the sound with the energy that this genre of music deserves. Remember that rhythm guitar is NOT 'second fiddle.'