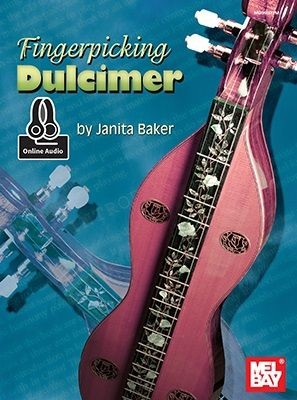 This collection by Janita Baker contains 21 songs arranged in a fingerpicking style for the mountain Dulcimer.
Fingerpicking Dulcimer offers a wide variety of musical genres and playing levels. Divided equally between arrangements for three and four equidistant strings, the songs progress in difficulty within each section from beginner to advanced level. Each piece is written in both standard music notation and Dulcimer tablature, and is accompanied by performance tips for playing that song.
Many arrangements utilize the 6 1/2 fret, and tunings range from standard modal tunings to four-string variations. The arrangements cover a wide range of song styles including traditional ragtime, blues, and classical standards.
Songs include: My Old Kentucky Home, Londonderry Air, All Through the Night, The Entertainer, Careless Love, House of the Rising Sun, Fur Elise and Bach's Minuet in G.
There is an extensive introduction on playing techniques for both left and right hands, tunings, reading tablature, and Dulcimer embellishments. The accompanying audio is an instrumental recording of solo Dulcimer, designed to give the student a note-for-note reference to each written arrangement while providing a performance-quality listening experience.