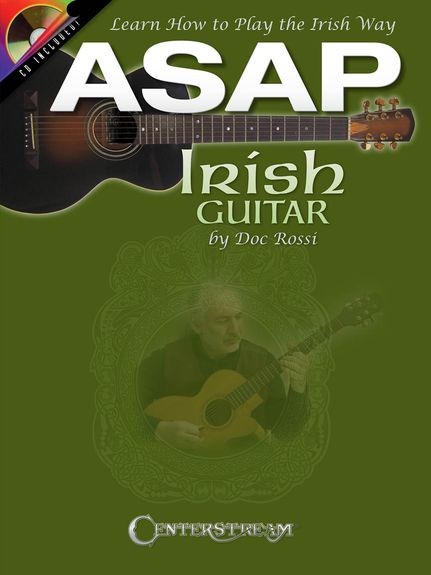 This quick guide to flatpicking Irish traditional music was written by Doc Rossi, a well-known citternist and guitarist in both traditional and early music. He's created this book for intermediate to advanced players who want to improve their technique, develop ideas and learn new repertoire.
Starting with the basics of technique and ornamentation in traditional music, Doc then goes directly into the tunes, in standard notation and tab. Focusing on traditional music from Ireland, Doc has also chosen tunes from England, France, Flanders, North America and Corsica to reflect the guitar's broad range.
Right- and left-hand techniques, ornamentation, arranging and other topics are taught through the tunes themselves. Doc has developed his own tuning for playing traditional music, and this book shows you how to use it.
His tuning makes it easy to play tunes in all the important traditional keys without moving a capo around or having to negotiate difficult position shifts, while at the same time providing a number of open strings and other possibilities for playing your own accompaniment.
An audio CD with all of the tunes played at medium tempo is included.

Songliste:
An Phis Fliuch
Fasten The Leg
Miss Thorton's
Rodney's Glory
The Banks Of Lough Gowna
The Fairies' Hornpipe
The Floating Crowbar
The Flowers Of Michigan
The Greencastle Hornpipe
The Humours of Ballyloughlin
The Liverpool Hornpipe
The Mist-Covered Mountain
The Peacock's Feathers
The Rights Of Man
The Swallow Tail Jig
The Temperance Reel
The Traveller's Reel